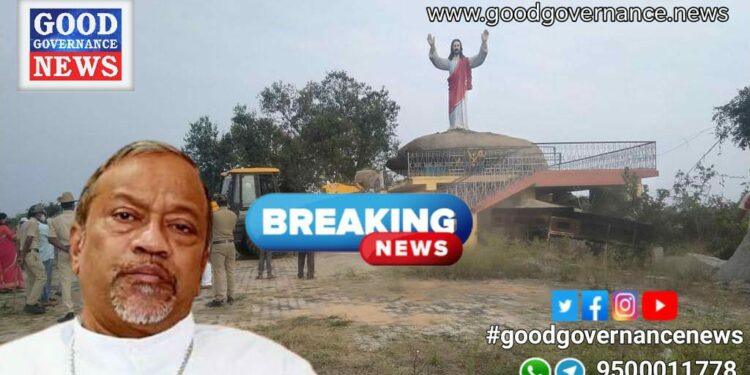 Karnataka :Two days after a 20-feet Jesus sculpture was removed by the Kolar district administration of Karnataka, Peter Machado, Archbishop of Bengaluru, has asserted that it was pulled down Violation of Court Order, and no composed notification was served on people worried before the approaching activity.

As indicated by local people, the region organization joined by almost 400 police officers arrived at Gokunte town – which is only two kilometers from Andhra Pradesh line – in the extremely early times on Thursday, February 15, to pull down the sculpture which had been existing beginning around 2004. With the exception of the four families in the town, which has a populace of around 600, the rest in the town follow the Roman-Catholic confidence.

Peter Machado claimed that the district administration proceeded with the destruction in spite of the way that the said place where there is (two sections of land) on which the sculpture stood had a place with a congregation, which had fundamental archives with that impact. The destruction was completed in light of the fact that the “neighborhood specialists considered them as not legitimate or deficient”, he added.

Peter Machado, Archbishop of Bengaluru, asserted that the destruction was done despite the fact that there was a stay request on the destruction from a preliminary court. “Regardless of stay request and best endeavors to help the neighborhood Tehsildhar, Ms. Shobitha, to comprehend the mandates of the court, she would not collaborate and even to share new orders of the court if any,”

Inspired by PM Modi, Odisha man lobbies for BJP as ‘Mahatma Gandhi’ for UP Polls