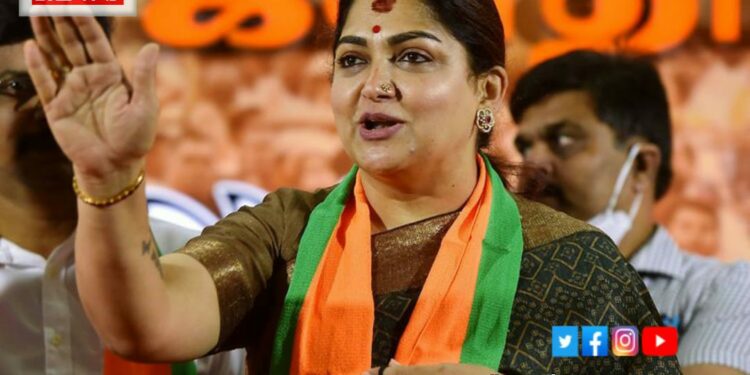 Responding to a question about actress-politician Gayathri Raghuram’s statement that women are not safe in the Tamil Nadu BJP Party, Khushboo said, ‘Not all women have left the party. I am also in the party,’.

Gayathri Raghuram, who was suspended from the BJP in November last year, announced her resignation from the party on January 3 and said that ‘women are not safe in the Tamil Nadu BJP party as no one cares about the real workers. Also, She blamed state BJP chief K. Annamalai for  leave the party,

But, I have no regrets for those who left the party and wished such persons well wherever they are,” said Annamalai.

Some in the DMK have worked against me and the BJP has stood by it. Khushboo said Annamalai fought for me because he was brave and took firm decisions.

The actress, who had come to flag-off the ‘Rekla race’ (bull cart race) organized by the party in Vellore, said that Pongal is a traditional festival of Tamil Nadu and brings happiness in every home.

Talking about the use of the word ‘Tamilagam’, he said, ‘It is not wrong to call the state as Tamilagam or Tamilnadu. Although I was born in Mumbai, I am a Tamil woman and have been living here for the past 36 years.

Before this, She prepared Pongal and traveled a short distance in bull cart .

Man rained notes from KR Market flyover; People who are desperate to get money; Who is he?

Man rained notes from KR Market flyover; People who are desperate to get money; Who is he?